With the epic lack of sleep and the big time difference, it took a couple of days to get our body clocks kicked into gear. Much fighting to stay awake, very early nights and unnatural waking hours were contended with. However Tuesday I think we finally got on top of it. Now to sort out the messed up appetite…

Turns out Sydney was having a heat wave when we arrived so we headed for the Blue Mountains on Monday where it was about 10C cooler (still 36C though!). But not before being lucky enough to see wild roos munching grass in a field at the side of the road on Sunday!

The views were breathtaking. We had a picnic in a quiet local park before heading into the tourist attraction to ride the steep railway, skyway and cable car, as well as take a stroll around boardwalked sections of the rainforest below. 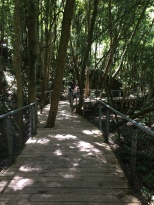 Pretty amazing stuff, all from a disused coal mine that was transformed into the tourist attraction that’s there today.

Tuesday was supposed to be hot again, so we headed to the coast to find cooler air. The boys both went in the sea, I did not. Unfortunately we ended up leaving a hot sunny area for an area that was overcast and incredibly breezy. It barely managed 22C, despite being over 30C back ‘home’. Oh well, my uncle has a pool so the boys jumped in there for the afternoon 😉 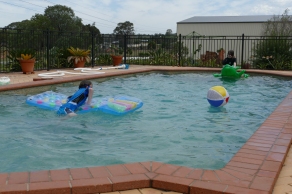